Here is a riddle I have composed after many months of a certain line of contemplation.

A Point of Life -The Riddle

I occupy a point.

The point is a location on a particular line.

The line is located on a particular plane.

Within the plane, I am occupying a location on an infinite number of other lines.

My point is the center of an infinite sphere.

I may move in any direction along any of the infinite number of lines occupied by my point.

As I move, each point whose location I occupy becomes the center of a new infinite sphere.

I may change my direction by choosing to move along any of the infinite lines whose path
claims the point of my new location.

As I move, I find that I have influenced an infinite number of spheres whose center I have occupied.

If I move backward to retrace my path, though I will again pass through the center of every one of the infinite spheres whose center I had occupied before, I cannot influence any sphere in the same way I had influenced it before because I have been influenced by each of the infinite spheres along my path.  The fact of my movement has changed me.  Though I go back, neither I nor my point can ever be the same as we once were. 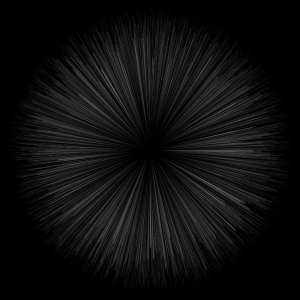 Get VISION -The Word in Vision Newsletter

CLICK IMAGE to go to form, then Look for your email confirmation.