I delve in the caves

Between heaven and earth.

Wheeled carts in the cave mine

-My notebooks- I fill

I tap in the deep.

Who will draw my carts

Out into earth’s light?

Who will fashion my gold

And fasten my gemstones

Fit for The Bride?

I have always been inside the hedge
Protected, safe and guarded.
Yet as I run non-stop and blindly
Each step just reaches past the edge.
I may by chance discover
Rock or soil or even watery depth
Unseen to me
Below each falling foot.
Onward moving, always dashing,
Ever within, yet ever
On the edge.

She rises in the fog.

The battle is not done.

The war will yet be won.

The day will finally dawn.

This darkness shall be gone.

For Yom Kippur, the Day of Atonement

Only one who has accepted the pain of suffering can understand the forgiveness of reconciliation.

That I may know him, and the power of his resurrection,
and the fellowship of his sufferings, being made conformable unto his death;
If by any means I might attain unto the resurrection of the dead.
Philippians 3:10-11

To forgive without the requirement of repentance is the beginning of reconciling the world to God.

And all things are of God, who hath reconciled us to himself by Jesus Christ,
and hath given to us the ministry of reconciliation;
To wit, that God was in Christ, reconciling the world unto himself, not imputing their trespasses unto them;
and hath committed unto us the word of reconciliation.
2 Corinthians 5:18-19

Scenario: A wife is falsely accused by her husband. (It makes no difference if the matter is small or great.) She recounts the facts to him as she knows them. He disregards her words and makes more cutting statements.
She may:
1. grow angry and hold him to pay by her angry coldness until he admits his wrong at which time she will forgive him.
2. forgive his sin not holding him to its charges.

What will become of this husband? What will become of this wife? If the wife makes the choice  of forgiveness # 2, the husband will be committed to the merciful justice of God, instead of being held to the punishment of the lawful charges of the wife. The wife, in taking the second choice, is committing herself to Him who judges righteously, according to I Peter 2:23.

Who, when he was reviled, reviled not again; when he suffered, he threatened not;
but committed himself to him that judgeth righteously.

NO NEED TO FEAR
There is nothing in this world or the next that can induce Father God to ignore the suffering of the innocent. He will avenge the innocent, but He is just.

Will He allow the perpetrator to fall into double jeopardy?

Either the victim will require the vengeance of the Law, or the victim will release vengeance into the hands of The Righteous Judge. Reconciliation of the earth can only be accomplished through all vengeance being released into the hands of Him who said, “I will repay.”(1) The prescriptions of the Law are weak (2). They cannot purge sin from the conscience of the sinner. Only the Merciful Almighty can find the individual prescription that will purge each sinner(3). Only He can bring the sinner to complete repentance. His vengeance will not stop short of a purged conscience.

He has committed unto us the word of reconciliation.

(2)Romans 8:3  “For what the law could not do, in that it was weak through the flesh, God sending his own Son in the likeness of sinful flesh, and for sin, condemned sin in the flesh:”

(3) Hebrews 9:14  How much more shall the blood of Christ, who through the eternal Spirit offered himself without spot to God, purge your conscience from dead works to serve the living God?

Let me live in the fire of the Ashen Altar,
Living sacrifice accepted above,
Laying my life down that others may live;
Just like my Lord has done.

“Follow me,” he calls, “in Death is Life.
The Fire has Resurrection power.
Your life laid down shall rise again
And multiply heavenly deeds.”

The title, Upon the Ashen Altar,  refers to the pile of ashes outside the camp of Israel where the ashes from the Altar of Sacrifice were dumped.  On the Day of Atonement each year, the bullock and the goat of Atonement were burned, outside the camp, upon those ashes.
(see Leviticus 4:12 and Leviticus 16:27)

Hebrews 13:10-13
We have an altar, whereof they have no right to eat which serve the tabernacle.   For the bodies of those beasts, whose blood is brought into the sanctuary by the high priest for sin [on the Day of Atonement], are burned outside the camp.   Wherefore Jesus also, that he might sanctify the people with his own blood, suffered outside the gate.   Let us go forth therefore unto him outside the camp, bearing his reproach.

Brandishing burnished Sword
Transparent in armour of Light
There stands the Warrior Maiden
Prepared for the darkest of night.

A curtain sliced through;
A way opened up;
Enters the Maiden
And drains the bloody cup.

Her life on the Altar
Long now has lain,
But up she has risen
Atonement to gain

For those who have hurt her
By whom she was slain.
She calls to the Judge,
“Forgive them my pain.”

Light pierces through;
The Earth opens up;
Stands forth her Beloved,
“You have drunk of my Cup.”

The two who are one
All infirmities feeling
Now spread out their hands
In forgiveness and healing.

Thank you Thursday Poets Rally for the Perfect Poets Award.

I nominate Harry Nicholson for the next award.

This was created for the cover of The Two Sons Diptych. 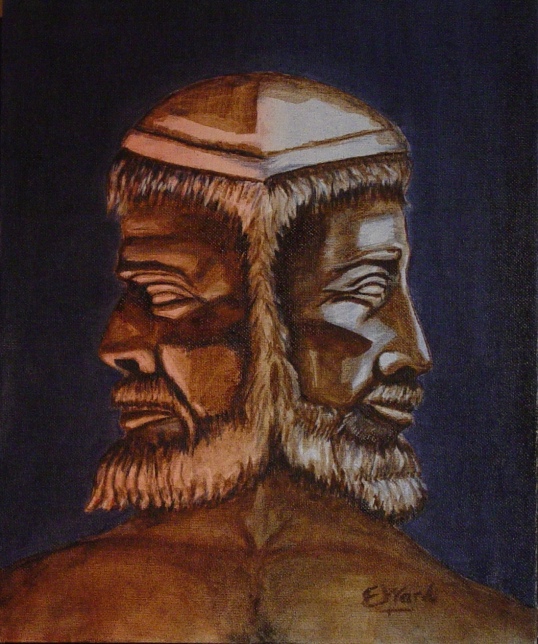 Get VISION -The Word in Vision Newsletter

CLICK IMAGE to go to form, then Look for your email confirmation.

The Word in Vision
Blog at WordPress.com.